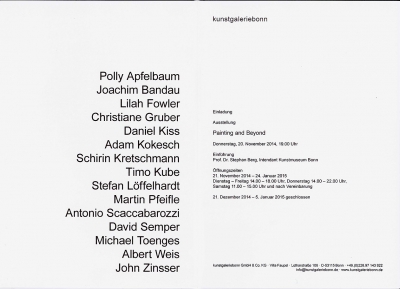 The end of painting has been evoke so many times. there have been so many grave diggers, from Duchamp upt to Ad Reinhardt, who made his "Ultimate Paintings" in the middle of the sixties. paintings on point zero. Good, that painters went on painting, that there was an exhibition within the Basel cycle "Painting on the Move", called "There is no final Painting" and that a book w called "End of Painting and Painting after the End of Painting was published aroung the millenium.

It is still exciting to search for the boundaries and the legitimation of the oldest artistical technique,  to discuss panel and format. At the moment a group of 15 artists are doing exactly this in a very inspiring way at kunstgaleriebonn, a show titled "Painting and Beyond" testing the possibilities of painting.

Most artists are already knowm from the gallery's program, some, f. e. tAntonio Scaccabarozzi, who died in 2008, or 78-ear-old Cologne artist Joachim Bandau, more known from his sculptures in public space, are worthile new discoveries. Bandau's works oscillating between painting and relief are made of a wooden core, which is covered with dark enamel. Scaccabarozzi lets the paint emancipate from the canvas. on this way he meets Christiane Gruber born in 1977, whose works look like skinned paintings. A long, dark green membrane of pure paint hangs in the staircase and more "skins" are found inside the gallery.

The weight of color is changed into an ephemeral play. David Semper plastered coloured ink pads into the wall, the ink blossoms now and changes the picture - this painting never reachs its end. Polly Apfelbaum, Stefan Löffelhardt, Michael Toenge, Martin Pfeifle, and most radically Albert Weiss, go a step beyond into the third dimension. John Zinsser, Schirin Kretschmann and Timo Kube test the possibilities of the second dimension. Lilah Fowler (sculpture) and Adam Kokesch (object) are the most exciting match of the show. 30-year old Daniel Kiss declares the whole room as a field for painting filling it with a wonderful sense for composition, orchestration and provocation.

View the embedded image gallery online at:
https://www.archivioantonioscaccabarozzi.it/site/en/exhibitions-and-catalogs/collective/item/164-2014-11#sigProGalleriafd4cef3287
back to top