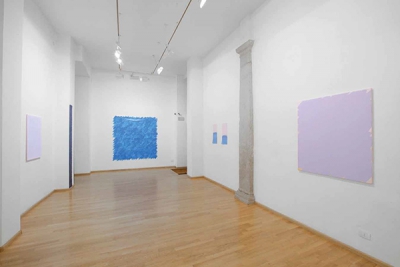 Introduction to the void

The exhibition’s subtitle - we shall talk about the title itself a little later - is taken from the Lyrical Plays by Alexander Blok (1) and proves to be particularly functional, not only in order to underline the assiduous presence of light blue in the work by Antonio Scaccabarozzi but also in accounting for the systematic principle on the basis of which he investigated different materials. If it is true that no colour is really neutral it should nevertheless be said that within the sphere of western symbolic culture (2) there is no other colour that embodies and conveys such an intense poetic importance as does blue in all of its shades and nuances. Due to its complex sonorities light blue, which is tied as much to depth as it is to lightness and rarefaction, represents the colour of the flower in poetry par excellence in Novalis and in German romantic poetry (3) in general : in other words, it is the colour of the soul. As we have written elsewhere regarding Scaccabarozzi, if painting is an “I don’t know what” or, better still, the ‘introduction to the void’ following an indication which the artist supplied by way of the title of one of his works of 1978, then it is evident that no other colour is more impalpable and yet close to the massing of the area of blue, as Leonardo taught with aerial perspective and sfumato.

From the outset with the period of the Prevalenze [Prevalences], the Misurazioni [Measurements] and the Iniezioni [Injections] Scaccabarozzi showed himself to be an atypical artist, above all regarding some aspects which lent themselves to being read as symptoms of unexpected 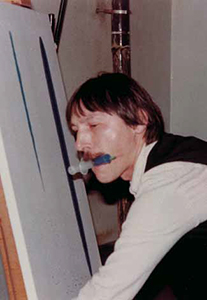 convergencies on which this critical text concentrates. This came about also taking into consideration planes that are less immediately evident with respect to material results and which can quite easily be referred, moreover, to other visual experiences such as those of the German Zero Group and in Italy to the investigations carried out by Castellani and Dadmaino. Rather, Scaccabarozzi’s reference was a more subtle and poetic conceptual area of research, one shared by Pino Pascali, an artist so apparently different and distant regarding whom we particularly want to mention the work of 1967 entitled 32 Square Metres of Sea. Pascali’s logic in this work, as was also true in the abovementioned cycles by Scaccabarozzi with their such eloquent titles, developed by starting out from the paradoxical measurement introduced by Duchamp in 1913 with his Trois stoppages étalon [Three Standard Stoppages]. These works put into form one of the principal functions of art: that of revealing the nature of play which mankind brings into play with regards to the infinite. The infinite: we have discovered the dimension from which the experimental audacity of their works took shape.

Seen in its entirety Scaccabarozzi’s work is at one and the same time particularly simple and very rich. A large part of it is made up of diaphragms, screens and veilings which act as lenses through which to look into the distance, beyond. Suffice to think of the aerial concretions of colour, of the light materialisations of pure, almost immaterial light on the part of the watercolours, the plastics and the oils of the Velature [Veilings]. Another altogether important and essential component is represented by the sensual attraction towards the skin of the painting, as is especially evident in the case of the Essenziali [Essentials], an example of its maximum concreteness. The artist is therefore equally attracted by two extreme poles, definable with different couples of opposites: we can indicate opaqueness/transparency and presence/absence. Exactly as Lucio Fontana worked on a baroque front, expressed very well with the Nature [Natures] and in one respect addressed to the infinite, made emblematic by the spatial concepts and the environments with Wood’s light.

The quality of Scaccabarozzi’s colours is important, however, and we need to linger on this element. The rarefied areas are often pervaded with light blue (because his work is disseminated with this colour) but also when there are other colours they are in any case unstable and indefinite. Colours like epiphanies which often ‘court’ the original whiteness of the light, ‘flurries’ of colour that sometimes are little more than sensual vapours. On other occasions the colours take on sumptuous and profound tonalities. However, whatever the case Scaccabarozzi constructed chromatic fields that attract attention precisely because of their rarity. Colours imbued with light rather than being dark. Unusual tones, real enigmas for perception, largely indifferent to any form of cataloguing and classification. It is difficult - if not even impossible - to single out and say the name of his colours because they are always dynamic, skillfully bridled by the artist in a state of instability which denies them whatever possibility of adaptation and settlement. Each of them is infused with a very rare vital quivering. They are colours like solidified silences: one would say silences transformed into colours. They communicate in a very convincing way by way of their clear introversion which precisely in the colour is the original principle of painting, in colour understood as dissonance within an unstable field, intermittent vibration and intimate sonority. In observing his colours one intuits the importance of the connotation expressed by the adjective Variable, the title of Scaccabarozzi’s exhibition held at the Fondazione Calderara (Vacciago) in the Summer of 2012.

These ‘fading’ colours give back to the eye its primary character of apparition, of epiphany. Above all the watercolours, almost impalpable filters, and the plastics that represent the maximum expression of the play of the pendulum so dear to Scaccabarozzi midway between the already mentioned poles of transparency and opaqueness, between seeing through and occlusion that almost even coincides with blindness.

It is therefore on colour that above all the artist’s investigation into the substance of vision was based, his experimentation of places and bodies of painting of the different consistencies and forms, ll variously interesting. Every colour is rooted to the material support which is the necessary go-between for its manifestation. Every introduction of new materials and tones in the work by Scaccabarozzi was aimed at always investigating new frontiers of the visible and, through declension, at taking on the complex essence of the chromatic phenomenon.

He used plastic as colour/light capable of living a relation of extreme mixing and fluidity with the surrounding environment. Syntheses of Scaccabarozzi’s pictorial interests as exaltation of veiling, of seeing through and of transformation, the sheets of polyethylene carry out a fundamental role in his work, as was true of the papiers gouachés decoupés for Matisse. The apotheosis of colour took place on the ‘slippery’ surface of the plastics, as on water: the liquid mobility of shimmering light accumulates, flows and changes colour with the result that every tone and shade is particularly vibrant and darting.

More than any other of his works active, mercurial, mobile and changeable, the plastics to the greatest degree carry out Scaccabarozzi’s goal, as was true for the cycle of the Nymphéas in the work by Monet: they inexorably instill in the spectator the awareness of the fact that vision, the eye, is a process that is perennially in fieri. The transformation of vision, of the eye. The artist’s work when considered as a whole bears witness to an expanded idea of painting which due to its

breadth and depth makes one think of Yves Klein (4): irrespective of the references as the result of the common use of the monochrome and their affection for blue - even if for Scaccabarozzi one should talk of blues - the two artists above all seem to share the inclination for the void, a void full and pregnant like silence following music, and the impetus towards the infinite. Paradoxically, for both of these artists the work as the momentaneous phenomenon of precipitation of a determinate immaterial sensitivity could also completely disappear provided its reverberation remained, the irradiation of a transformation.

The void into which Yves Klein leapt in his now famous action um- manifesto of October 1960, a photomontage entitled Saut dans le vide [Leap into the Void], is the space to which to introduce the work by Scaccabarozzi. If it’s true that the role of the poet is to guard light blue, distance, then Scaccabarozzi is a poet who investigated the mechanisms of vision and affirmed its enchantment.

His art is the opening of an all-out indefinite space.

(2) Pastoureau, Blue: The History of a Colour, Princeton University Press.

(4) I am grateful to Silvia Bignami and Giorgio Zanchetti for the fine essay they wrote for the exhibition Klein and Fontana which I read while drawing up this critical text and which has confirmed some intuitions on my part (Silvia Bignami, Giorgio Zanchetti, Universi paralleli. Yves Klein Lucio Fontana, in Klein Fontana, Milano Parigi 1957-1962, exhibition catalogue, Museo del Novecento, Milan,

(The Catalogue of the exibitions ia available for downloading, see the PDF file attached)

View the embedded image gallery online at:
https://www.archivioantonioscaccabarozzi.it/site/en/exhibitions-and-catalogs/personal/item/168-2015-02-introduzione-al-vuoto-nuova-galleria-morone-milano-i#sigProGalleriae5f5840d63
back to top